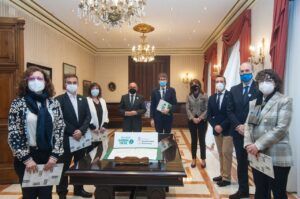 The City Council of Vitoria-Gasteiz, the Provincial Council Foral de Álava, the University of the Basque Country / Euskal Herriko Unibertsitatea , the Institute of Health Research Bioaraba , the Vital Fundazioa Foundation , the Official College of Pharmacists of Álava, BIC Araba , AMVISA and Aquadat have signed this morning a protocol for the development of an Innovation Program in the field of Pharmacontamination that reflects their commitment for researching, applying and disseminating in Vitoria-Gasteiz and Araba solutions against the contamination of our environment by drugs.

The mayor Gorka Urtaran , the deputy general Ramiro González and the rector of the UPV / EHU Eva Ferreira have given an account at a press conference of the signing of this agreement, in a ceremony that was also attended by the scientific director of the Bioaraba Health Research Institute Mª Ángeles García Fidalgo , the president of Fundación Vital Fundazioa Jon Urresti , the president of the Official College of Pharmacists of Álava Milagros López de Ocariz , the director of BIC Araba David Montero , the president of AMVISA Mª Ángeles Gutiérrez and the co-founder of the startup Aquadat, Jorge García del Arco. The representatives of the 9 entities have signed the collaboration protocol, which frames the actions that will be developed through different specific agreements.

One of the motivations for establishing this alliance is the toxicity problems that the planet suffers more and more. The growing concern about the so-called “emerging contaminants” has led to a focus on pharmacontamination, due to the effect that contamination by drugs can have on the environment at any stage of the drug’s life cycle.
Specific research project

By way of example, this protocol will support the launch of a research project to determine the presence of emerging pollutants (among which pharmacontamination is of special relevance) and their potential impact on wastewater and ecosystems. Furthermore, the scientific and social dissemination and dissemination of the research results will be promoted through conferences, seminars and congresses. 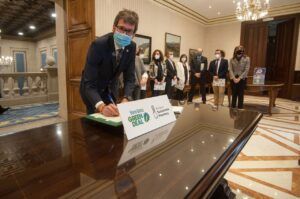 Rational use of medicine

Another of the commitments adopted is to work on the identification and development of solutions for a rational use of the drug and to facilitate training on the impact of pharmacontamination for healthcare personnel. The signatory entities will also promote technological solutions aimed at improving efficiency in the disposal of pharmaceutical products.

This initiative of importance for Vitoria-Gasteiz and Araba has a history of collaboration between researchers, researchers and entities that now participate in this protocol: the study on the epidemiology of wastewater for the early detection of SARS-CoV- 2, quantification of drugs and analysis of toxic substances developed by scientists Gorka Orive and < strong> Unax Lertxundi.

The mayor of Vitoria-Gasteiz, Gorka Urtaran has valued the suitability of Vitoria-Gasteiz and Araba as laboratory territory. “ Scientific research is a key tool to help understand and improve reality and that helps us to adopt political measures or actions. Today we sit at the same table institutional agents, scientists, from the field of research and entrepreneurship, the graphic example of what I consider the Vitoria-Gasteiz Green Deal, a pact for our city, for the future of the next generations and a pact for the planet ”.

For his part, the deputy general of Álava, Ramiro González , wanted to emphasize the “ need to train, investigate and have technology as an ally to face emerging problems such as This is the case of pharmacontamination. The Provincial Council shares and is committed to innovation and has been supporting these models of public-private, inter-institutional collaboration and with various agents for a long time. It is a fact that these alliances work in projects aimed at consolidating the future of Álava. With this agreement, we are laying the foundations of knowledge to be investigated in R + D + I in technology, to decontaminate and purify these pharmacontaminants from the waters “. 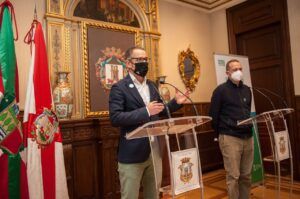 Also the rector of the UPV / EHU, Eva Ferreira , has underlined the importance of the protocol that different institutions and entities from Alava have signed today: “An agreement of intentions like the one we have now signed shows once again the extraordinary value of university research at the service of society. Pharmacontamination is a problem of the first magnitude. For this reason, the political and social commitment in defense of the environment needs the support of scientific research and, with it, of the Basque public university ”.

The UPV / EHU researcher Gorka Orive has stressed that “this agreement is the seed and stimulus necessary to initiate a set of activities in our environment such as quality research, training a pioneer in the matter and the dissemination and dissemination to the public of the problem of pharmacontamination ”.

We offer advice in technical,
production and financial matters

We can help you in your search for economic, technological and training resources, with a feasibility study you may need, or in obtaining government grants.

If you are or want to be an entrepreneur,
we offer training that may be of interest to you

We improve the expertise as well as the overall level of quality of professionals who want to improve their qualifications.

We provide spaces for the development of new activities

We have industrial premises and offices available with subsidised rental fees.